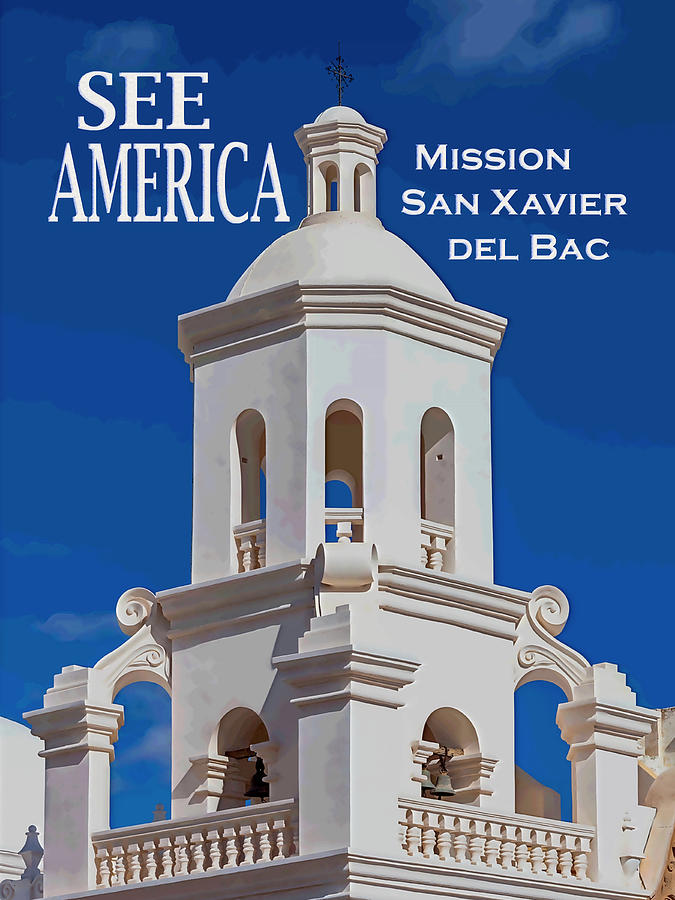 Mission San Xavier del Bac was finished in 1797 making it the oldest European structure in Arizona. Located just south of Tucson, it is the spiritual center of the Tohono O'odham people and draws thousands of pilgrims every year.

About "See America":
Back in the early 1930's for a span of about 10 years toward the end the Great Depression, the federal government tried to find ways to get people working. One of the actions taken in 1933, as part of the New Deal under Franklin D. Roosevelt, was to create the Works Progress Administration (WPA). later renamed to Work Projects Administration.

The WPA had many programs to include things like building bridges, parks and many other public works. They also put together programs that would foster the use of artists's skills to create products that brought culture to the masses. Among these, they hired writers, painters, designers, and others to produce posters as communication media for many different programs and campaigns. The purpose was to create interest in our commerce, enhancing peoples lives, promoting health as well as providing safety information. Out of this was also born the "See America" series of posters, original artworks created to encourage tourism to domestic destinations.

Recently, the National Parks Conservation Association (NPCA) has
partnered with the Creative Action Network, a web marketplace, to create the "See America" campaign for our times. The campaign was designed to showcase our national sites through the sale of posters, tote bags, mugs, and other items, taking the original WPA "See America" posters as inspiration.